This will be short.  I may expand it in the future.  In fact, I only have one item right now.

Car companies should not ever ever ever try to design bicycles. Nope.  Stoppit.  Smack whoever came up with this idea.  Auto guys have NO idea how simple and complicated bicycles are.   Inevitably, they try to fix something that doesn’t need fixing, add too much, and the result is stunning in its mediocrity.

No, the word “mediocrity” implies that it actually fits on a continuum of goodness.  Inevitably, the result in these cases is somewhat like going up to somebody, asking for directions, and hearing “fish sticks appalloosa” as a response.  Doesn’t even belong on the scale for directions (which goes from “situational/emotional topography” to “ex military precision” without passing through any of the food groups or domesticated animals on its way.  Don’t worry about the first bit, I’ll explain that in a later post the next time somebody gives me situational/emotional directions and I feel like ranting about something.)

Particularly car companies that are pretty good at designing cars.  The results are always horrendously overpriced and abysmal.  If Hyundai did a bicycle, they’d probably actually do pretty a good job… less arrogance, lower expectations….

Never mind.  At least it’s cheap.  On to the cool car companies: 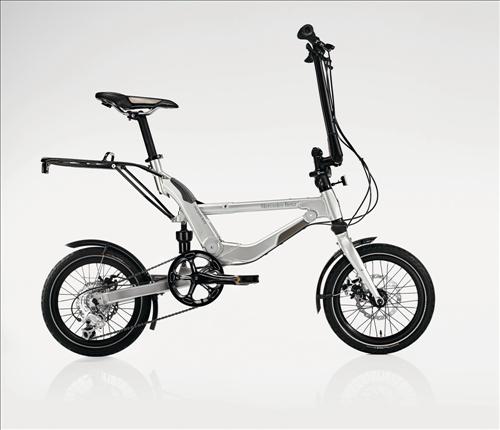 Mercedes bike.  Never thought I’d see something that makes a Brompton look sexy.  Note the almost complete lack of trail (“But ve haff rake, is that not vhat you need for ze good handlingk?”).  1699 Euros.  The stylists were on an extended coffee break when this thing was whisked through ID for approval.  The guy who signed off on it was actually the janitor.  The scene was half Good Will Hunting, half Rain Man, but with no math.

Porsche Bike – Clearly their stylists spent more time on the wheels than their FEA guys (curved spokes FEEL stronger.)  In a fit of pique, the FEA guys then swiss-cheesed the hell out of the billet pieces holding the frame and swingarm together.  To get back at them, the stylists stole the boot off the shock so it would only last two weeks but would look more “technical.”  The project manager for this excresence is still in a mental asylum somewhere outside Hanover.  $10,612 in 2001 dollars.  PT Barnum is still counting his money somewhere.

There is one exception to this, the Ferrari/Colnago collabo bike.  It gets away by being only horrendously overpriced.  But it’s definitely not abysmal.  Clearly, the Colnago guys put the Ferrari guys in their place right quick.  “You-a… you choose-a the colorway.  We do the rest, yes?  Maybe you design the stand?  For the store, in Milan?” Ferrari by Colnago, the lone exception.  $12k plus.

(and people get mad at Ducati for building a muscle cruiser… sheesh!)

I just realized that I completely let BMW off the hook in this post.  While we’re on this rant, we might as well take a look at what our Bavarian friends have cooked up in the two-wheeled human-powered realm.  Shall we?

Actually not so bad.  I’ts got a bit of the Chris Bangle thing going on in places, but it’s at least trying.  It’s only when you realize that you’re paying for $1000 for roundels and Alivio componentry that things begin to smell a bit sauerkraut-y.    You could get a nice bike for $1000, probably with 105 or Rival.

Let’s see what else Ze Germans have on offer…

I’ll leave it at that… at least till I find something new to add.

Today was day 2 of my second official #30daysofbiking. This time around, I’m doing at least 10 miles a day. With longer rides on the weekend, I’m hoping for about 500 miles or so in the month.  We’ll see how it goes.  I’m starting stronger than last time by a long shot.   Some of those early rides were pretty dire, and the rides the day after that were even more pathetic.  But I got through, and I can safely say that I rode more days than I didn’t over the last 6 months or so.  That’s got to count for something on the old health-o-meter, right?

As I think back on the previous #30 (which turned into 105), I find myself thinking about the power of the social network.  It was a chance encounter with a post by somebody I hadn’t seen since high school that piqued my curiosity and got me back on my bike again for so much of the summer.  What a cool coincidence, and what a cool time we live in that this sort of thing can and does happen.  Before #30daysofbiking, I didn’t really even follow twitter much, and didn’t really get what the big deal was about.   Now I get it.

The funny thing is, this isn’t the first time that this has happened to me.  Nearly 5 years ago, I found Crossfit, and I can safely say it’s changed my life for the better.  This was an early example of the power of social media and open-source thinking to change lives.  I much prefer Crossfit’s approach (free, social, interactive) to Tony Horton’s expensive, overly-produced P90x and their variants.

Think about how you stay informed these days.  I still listen to the radio (MPR, contributing member, thankyouverymuch), and I occasionally turn on the TV, but most of my information is delivered to me on my terms, in little previews that I can explore in greater depth if I choose, when it’s convenient for me.  I have the whole internet in  my pocket *ALL THE TIME.*  Such connectivity was science fiction 10 years ago.  Now it’s like breathing.

Now that the technology is here, look at how fast we’re learning to use it.  Read your facebook feed and see how much news has crept in, and how much other information is improving the signal to noise ratio (provided you are good at hiding apps like FarmVille and Mafia Wars. )  Links to Pandora, news sites, and other media are the next wave of connectedness.   Say what you like about Jobs and Zuckerberg and the like, those guys at least have a vision for a future where you can do more and see more and stay more connected with people who matter to you.

Sure, there are problems, and there’s abuse, but that’s nothing new.  The  Ponzi schemers and patent medicine hucksters from the past are no different than the phishing, 419 scamming scumbags we have to deal with today.  Set up a system and a small but visible minority of the population will try to take advantage of it in not-nice ways.  Doesn’t mean that the system isn’t worthwhile.

Think about the rate of change in the last 5 years, then think about what’s going to happen to news, marketing, sales, and politics over the next 5 years.  What will top Old Spice Guy?  You can bet there are legions of very smart people working on that right now.

More importantly, when will we reach the next tipping point, and what will that be?  What’s after the iPhone generation?