Except when it paints a very stark picture of things.

Recently, I followed a link to this article about why the US isn’t anywhere close to a socialist state  (short version: if we were, then our kids would be doing better, our income inequality would be smaller, and life in general would probably be better for the majority of Americans.)  I reposted, because I thought it was a good article that raised some interesting points.  Not that facts matter much to tea partiers.  But because I’m pretty liberal, and an engineer, and curious, I enjoy facts.   I was left wondering, though, where the facts came from.  It was an op-ed piece, so I understand why they didn’t cite sources specifically, though it would have helped their cause.   So I went looking, and found a wealth of information here:

It’s not that easy to use at first, but you can dig into some complete datasets from countries around the world regarding GDP, unemployment rate, spending on healthcare, etc.  I was able to generate some pretty neat graphs.

and you should be able to recreate all of what I have done here.

Some graphs paint a very disturbing picture of America’s place in the world.

I just finished watching Klunkerz, a documentary about the birth of the mountain bike in Marin County, California.  It’s quite the inspiration to get out and ride, moreso than the usual cycleporn/sledporn/motorcycleporn I throw in the DVD player.  This was a bit slower paced and more accessible than HD footage of some 20 year old with no sense of his own mortality hucking himself at 60 frames per second (played back at 25) off a jump it took 3 days and a crew of 20 to build across a goat trail in Patagonia.

Wow, those guys did some cool stuff.  They literally invented a whole new lifestyle out of stuff they had lying around.  It took hold, and now look at it.  Sort of like snowboarding outgrew and out-cooled skiing (sorry, two-plankers.)  I wonder if there are any more sports like that?  Is stand-up paddling doing the same?  I think it will if you can catch decent waves off boats and surf on inland lakes and rivers.

Memo to self: try that this summer.

I did get a little kick out of the bikes they were using as the starting point for the mountain bikes.  The best frames, apparently, were stripped-down Schwinn Excelsior Xs.   They took these old newsboy bikes with balloon tires, and stripped off all the crap that Schwinn had bolted to them to get them to look like old motorcycles.  This is interesting, because in the late 20’s and 1930’s, Schwinn owned both Excelsior and Henderson motorcycles.  Excelsiors were the V-twin American style cruisers, and the Hendersons were big inline-4 touring bikes. 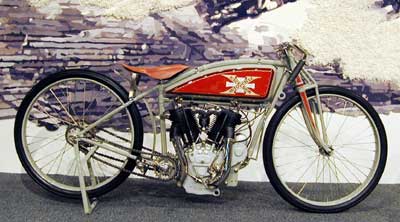 The most famous model was the Excelsior-Henderson Super X…  easy to see where the bicycle name comes from.

So the Marin County hippies were stripping these bikes down to the frames and riding them in the hills.  Then they started adding to them.  Some of the first things they added were decent brakes… which they sourced from tandems and period off-road motorcycles.  It would, of course, take many years for bicycles to follow the evolution of motorcycles, from fully rigid, to hardtail with front suspension, then fully suspended.  As with motorcycles, it took many years for any of that suspension to be worth a damn.  I suppose the motorcycle’s greater power and speed made the weight penalty of suspension less of a barrier, and more of a necessity.

The reason this gets me so nostalgic is that I actually worked for a descendent of the Excelsior-Henderson company from 1997 to late 1999, designing parts of what was supposed to be a revival of the original Super-X.  [ before you comment, yes, I know the springs are quite large.  I may have done the engineering on them, but I was forced to make them that big- I had no control over style.  Blame Dave Hanlon and Tony Pink… I think their names are on the design patents.]  Blame me for the fact that the front end worked at all, and that the front brakes played nicely with the suspension.  During this time, I wouldn’t have known even one tenth of what I was doing without a misspent youth tinkering with bicycles… including, it just so happens, an old Schwinn  balloon tire bike with a coaster brake, really wide Tommasselli knockoff handlebars, and a frame identical to the one Fisher is riding in the picture above.  Imagine that- boy grows up tinkering with a bike named after a defunct motorcycle brand, only to find himself helping to revive that brand one day.

It’s all very incestuous, really, when you think about it.  The design lineage and technological advancements from one field have been crossing over and influencing the state of the art in the other field for more than a century now.  Each discipline serves as an incubator for new technologies and ideas.  Motorcycles got to develop suspensions, disk brakes, loud pipes, and the feet-forward riding position.  Bicycles get credit for spoked wheels, the diamond frame, chain drive, drinking decent coffee before a ride, etc.  (I am aware that many patents for technologies existed in one discipline first- my categorization here is based on which was able to bring that technology to widespread commercial success.)

Keep your eyes peeled, because right now we’re in a phase where bicycles are teaching motorcycles a thing or two.  Dirt bikes have gone from steel frames to Aluminum.  From bicycle evolution, we know what comes next:  Carbon fiber.  After that, bicycles will teach motorcycles that bigger wheels roll better and that stripped-down minimalism has its own beauty.  Come to think of it, are fixies built from 1970’s Schwinn World Travelers == hardtail bobbers built from 1970’s XS650s?  The similarities are definitely there.

Where do we go from here, then?  What comes after bobbers and rat rods and tattoos and piercings?  Are we all going to be oohing and ahhing over metalflake-coated restorations of 1970s GoldWings with Vetter fairings?  Will the (mini?) Van Kulture come back?  Are Dodge Panel vans going to replace street rods at the car shows?  Is the next ZZ Top video going to feature a 1984 Chrysler Voyager?

So I work with a bunch of whack jobs.  Total nutcases.  To tell the truth, it’s the main reason to keep going to work.  You get drama, comedy, tragedy, motorcycles, interesting problems to solve, and a paycheck.  Who wouldn’t love that?  People pay good money to get all of those sorts of things at different times, and we have them in abundance, all day long, every day.

I mean, just look at the people we have on staff.  We have expert level roadracers, six day enduro riders, tractor pull aficionados, rock crawling maniacs whose lives seem to revolve around 30 year old trucks, gun nuts, pilots, tinkerers, farmers who became engineers, engineers who became farmers, auto industry refugees, hunters, fishermen, and guys that are so nuts about baseball that they bought an airport shuttle van and have it pimped out far more than it has a right to be.  Think “Hogan’s Heroes” without the respect for authority crossed with the Mythbusters guys and the computer nerds from “War Games” and you’re close.

So my buddy Z flings a magazine over the too-low cube wall at me the other day.  “Check this out” he bubbles.  Z bubbles a lot.  He’s a very happy individual who doesn’t take himself too seriously.  I’ve noticed that that tends to correlate with people who have a good time.  This is a typical Z office moment:

The magazine is the latest Cycle World, which has an article on the Five Five Five, which is a form of race.  Or endurance event.  Or something between the two.  It’s a cross between 24 hours of lemons and the Iron Butt Rally.   The object is to obtain a motorcycle and get it in something like serviceable condition for less than $500.  It should be older than 1975, and no larger in displacement than 500cc.  Then you race it somewhere.

This is right up our alley, I think.  Here’s to hoping that our house sells, and that the new house comes with a basket case but complete 1973 Honda CB360 thrown in.  Or an old XR-something.  Dual sport would be cool.  Bombing along on backroads on machinery as freaking old and maladjusted as we are. If we do this, I promise to document everything with camera gear as near to the era that I can find.  I suspect some of my odder old rangefinders may work, which is good because they are light and easy to carry.  I have next to me a Nikkormat EL that may qualify (though it may be an ELW, which was released in 1976.)   Shooting Tri-X.  The only concession to modernity shall be the scanning of film and posting to the web.

I can see this taking hold like Lemons has…

Stumbled across these at the Imperial War Museum Prints online store.  Click on the images to go to the store.

We don’t race vintage sleds at work at lunchtime.  For insurance purposes, it’s a rally.  Either way, much fun is had.  I’m better out on the course with a camera than with a sled.  Inevitable mechanical problems with 30-year old machinery kept me from getting too many good laps in this last year, but I learned a lot.  Mostly stuff about how to get a vintage sled running again, but whatever…   Man needs something to strive for, right?

This set contains most of my best shots from the last two years.  It was taking these that made me realize that I am actually starting to figure out what I’m doing with a camera.  As soon as I walked out to the course, I knew I wanted the shot shown above.  To my eyes, it’s not perfect, but it’s pretty close to what I had in mind… a whole row of riders, all on the same racing line, showing how close the racing is, and giving an idea of the intensity involved in piloting such scary machines around a bumpy, slippery course.

Scary?  You bet!  40 or more horsepower, maybe 6 inches of travel, pretty much zero damping, worn out skis and steering pivots, and ever-changing conditions.   Throw in questionable ergonomics, safety systems that were either nonexistent to begin with or rendered inoperable due to neglect, apathy, misguided machismo… yes it’s scary.

Speaking of scary, this shot was taken with my D300 and an 8mm Samyang fisheye.  Manual focus, shutter priority.  Prefocus on the racing line, stand as close as I dare to the action, shoot, and yank the camera and myself out of the way before any of the aging, rattling, snarling beasts has the chance to take me out.  Good fun!   Not too many near misses on this session- enough to let me know that any closer would be foolish… which means that I was just close enough.

Post was done in Adobe Lightroom.  Clarity and Contrast bumped, saturation bumped a little in camera and further in LR.  Dropped a stop of exposure out of the sky with a gradient (much easier than messing about with polarizers or gradient filters.)  I should probably spend some more time on it in PS… get rid of the light pole and the van in the background.  But I like it.  It’s close to what I wanted.